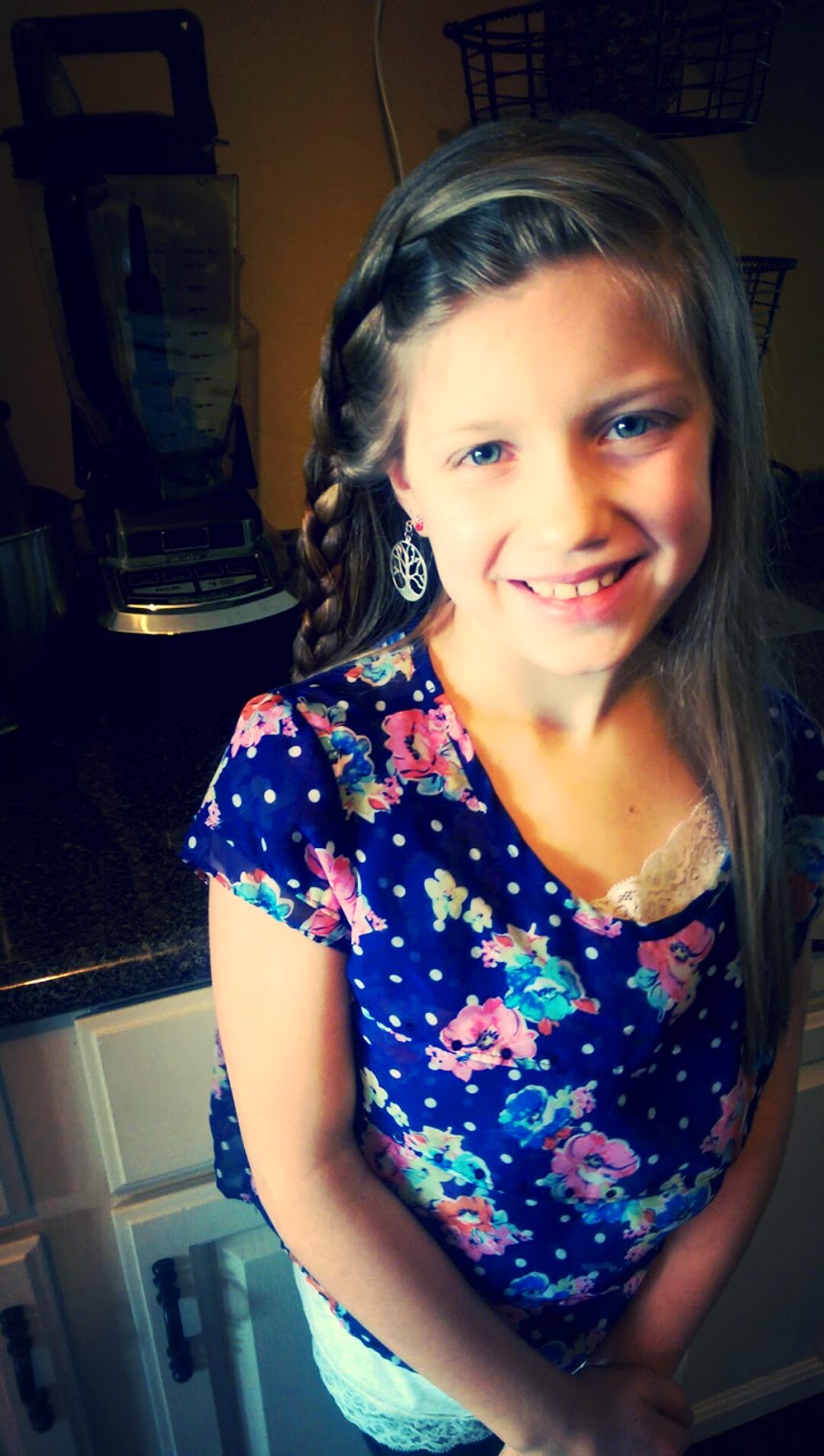 Sacrifice. It seems almost impossible to teach such a thing. I honestly never really thought too much about teaching it to my children. I guess I could've encouraged them to want to learn about it. I could've tried demanding it, but then again, you can't demand sacrifice. A person that truly understands the heart behind sacrifice...can't be forced. They must simply be given the option...and then willingly choose...what Christ would. As we near Easter, God gave me a front row seat to a lesson in sacrifice, by my 8-year old daughter.

What I witnessed this past weekend was extremely hard for me to watch, and at the same time absolutely beautiful. Many tears were shed. Some of them were in view of those around. More important to me, were those done in secret. They were not tears of shame. They were tears of awe. Tears of pride. Tears of thankfulness. Oh how I love the days God allows me to see His hand. Even more I adore the days that He chooses to let me see evidence of His Son in my child's heart.


It was the day before we were leaving and we were all so excited about our trip this past weekend. It was our last 3 hour trek to watch my son in his final swims of his amazing season. He had qualified for the 2015 Pennsylvania State Championship Swim Meet and I was not willing to miss it. (Even though I was fairly convinced that I was getting the flu.)

The seemingly ever-struggling procrastinator in me had once again...won. I still had literally every thing left to do before we could leave. Even though the plan was to leave promptly at 8:00 am the next morning...I could not stand for one more minute. I had cooked dinner for my family, on the verge of getting sick all over it. (Sorry for that mental image.) I had loaded the washer and dryer one last time. I just could. not. stand. Packing was not going to happen that night (as had been previously planned).

The next morning I woke up...no improvement. I pressed on. Showered. Completed barn chores.  Packed clothes, shoes, swim suits, snacks and toiletries for 6. Fed the littles. Loaded in the mini-van...and off we went. Shortly into our twisty turny trip I was struggling. I could not take my eyes off the road for fear of getting sick. I could not even speak. In my silence I kept thinking of all the things I had eaten the day before. (It was not helping.) We finally reached our destination 4. hours. later. and I just wanted needed a bed. And it was there that I stayed for the entire afternoon. And evening. And most of the next day.

Two full beds, one roll-a-way bed, six people...one which now had confirmed having the stomach flu. Before our first night was spent in that hotel...there was a conversation that needed to be had.

What were our sleeping arrangements going to be?

1. My husband had other kids to think of besides just our own. You see, he was one of only two coaches that was allowed on deck for the State meet Friday night, all day Saturday and Sunday morning. There were other kids counting on him to be there. He was their last minute support when their parents were not permitted to offer it. He was their reminder to relax and breathe. He was their voice of encouragement. He needed to stay healthy.

2. My oldest son was the reason we were all there. He was the nine year old that earned his way to this State meet. He needed to stay healthy.

3 & 4. My middle son and my youngest son are almost identical when dealing with flu-like symptoms. Sit/stand/lay where you are...and let the vomit fall where they needed to stay healthy.
it may. Seeing as how we were not in our own home, I had a limited number of wardrobe options and absolutely nothing with me to clean such a mess,

5. That left one. My sweet Ariel. I sat her down on the bed next to me. I explained everything that I just wrote above. She understood that sharing a bed with me for the next two nights, significantly increased her chances of getting what I had. She agreed that it was the best decision.

Sacrifice. Whether she or I realized it at that point or not, that is exactly what she did. She was given the option...and she chose what was best for everyone but herself. I was so proud of her. I was shocked by how easy the decision was for her. She did not need me to plead my case to try to convince her. She knew what she needed to do, and she did it with a smile. Jesus was there, and I know He was pleased with her.

Fast forward to Saturday evening. My time of misery was passing...and Ariel's was just beginning. Even through her fever and chills, she slept fairly well. It was now early Sunday morning. It was Aiden's turn to take the pool and our hotel stay was quickly coming to an end. No matter how sick any of us felt...we had no choice but to leave.

We arrived at the natatorium just before 6:30 am. My goal was to find a seat at the top of the lowest section, to assure that it would be easy to rush to the restroom if needed. We were too late. It was not even 7:00 am...and there were soooo many people already planted in their seats for the day. We ended up half way up in the highest section. This is where the lesson was hard to watch. 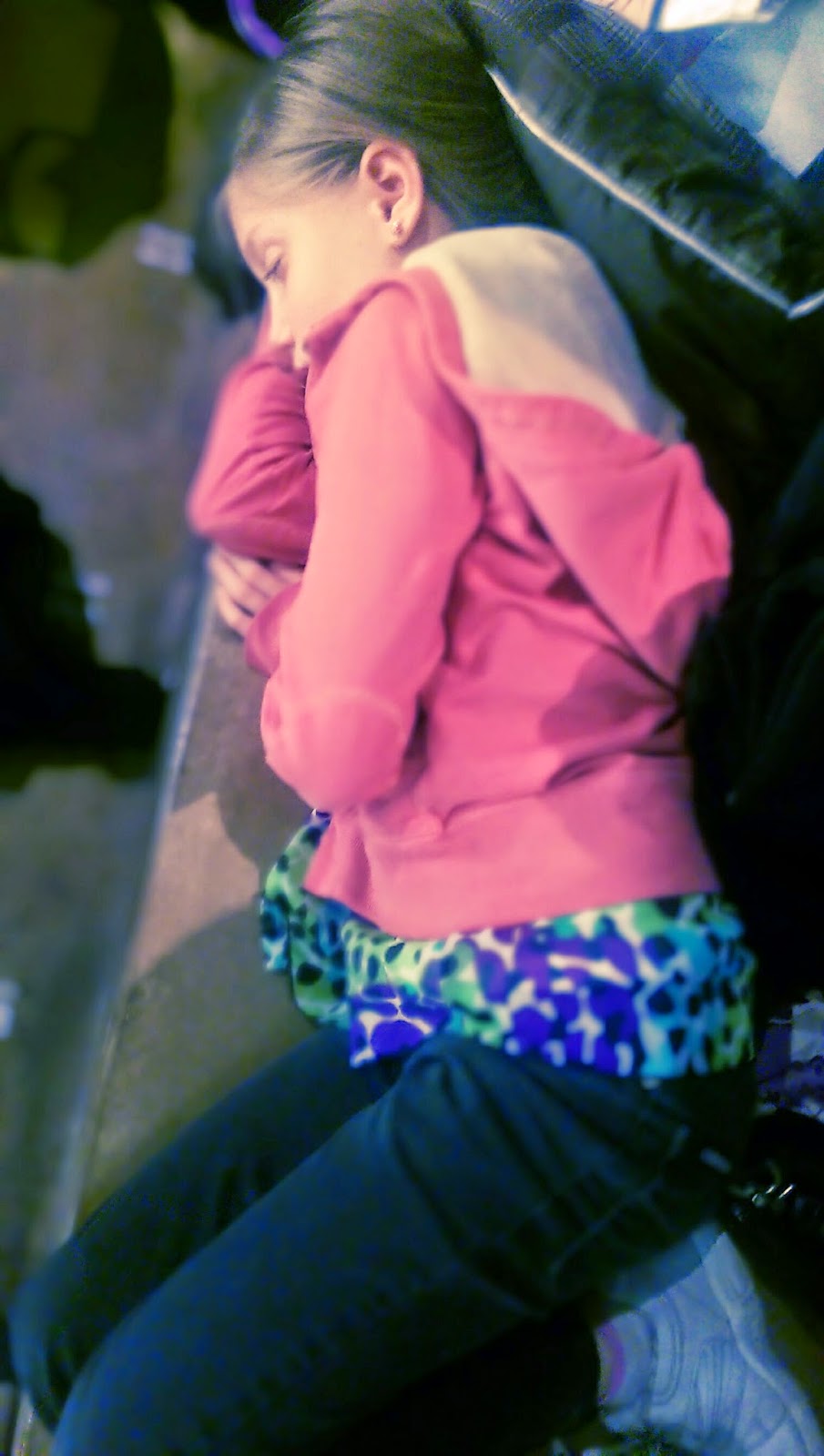 My baby girl spent her entire morning laying on a cement seat, with a fever. She would sleep. She would wake. She would run down three flights of stairs. She would wait in line...to throw up...in a public restroom. Wash hands. Rehydrate. Repeat.

All day long I fought back tears that would likely not have been understood by those looking on. A large part of my tears were definitely driven from how awful I felt that I was the clear cause of her misery. But most of all, they were in reaction to what her sacrifice cost her.

When I saw her....I saw Jesus. I know without a doubt that He lives within her, made possible only by His selfless act of sacrifice on the cross. She proudly asked Jesus into her heart to be her Savior at a young age. She knelt on the floor of our dining room, and by the invitation and prayers of her older brother, she made the most important decision she will ever make.

When I look at my daughter, I can clearly see that God is already instilling in her, the instincts she will need to be a godly wife, mother, friend, servant. Sacrifice is a big part of all relationships. She will sacrifice many times in her life. And even when her sacrifice leads to discomfort and pain...her reward is not here. I would hate for her to settle for earthly compensation. Heaven awaits this little daughter of the King. And her reward...will always, ALWAYS be worth the selfless sacrifice.
Posted by Vanesa K at 5:00 AM 1 comment: