How Do You Eat Your Augie’s Pizza?

I’m BAAAAAAACK!! :-) Oh how I have missed writing over the past couple of months! I got my computer back last week and God gave me an illustration the very next morning about Augie’s Pizza! (If you haven’t had it, I’m sorry. If you’ve had it and don’t like it, YOU. ARE. CRAZY!) The weird part is that the illustration came when I accidentally dropped my deodorant on the floor and it smashed into lots of pieces. Bahaha! It’s only funny because my husband randomly bought me a Sam’s Club size pack of deodorant a few weeks ago. As I was opening the pack while getting ready this morning I noticed it had three “Shower Clean” scented sticks…and one that was the ‘featured scent’. I pondered…do I start right off with the best…or do I save it for last? That is where Augie’s Pizza came into play.

For those of you that have never had Augie’s…that probably means that you have never visited my hometown here in NW PA…and it is a crying shame. ;-) I could eat it for breakfast RIGHT NOW dinner most nights if finances allowed. ;-) My two oldest children attend a local Christian elementary school. They have the option to purchase their own little personal size Augie’s pizza every Monday for their hot lunch. (Jealousy is wrong……right?!? Lol!)

So here is lies my illustration. This will once and for all prove that I can take ANY THING and bring God into it. I’m bringing truth into pizza today. Love it!

Let’s just say you do not know, nor have you ever had pizza from Augie’s. You will still understand the illustration…but you might not be AS passionate about it. ;-) Simple question. “How do you eat your (Augie’s) pizza?” Anyone that has been with me will notice my ritual is specific.

First, remove the THICK cheese that is hiding the pepperoni underneath. (Fold cheese and set aside to be devoured later.) Next, eat slice of square pizza AND the yummy crust that is your only hope for holding it. Last, roll cheese with attached pepperoni and consume. **Eat salad to lower level of guilt and move on from there.** ;-) 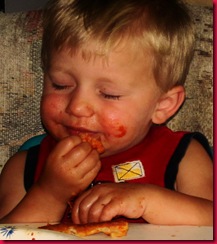 (My middle son, Titus when he was just a wee little man. He did not close his eyes for the picture…he was literally falling asleep while eating his Augie’s this hot summer evening. Proof…you want proof? You know I got it! ;-) 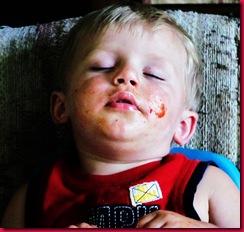 I’ve eaten Augie’s (and only Augie’s) pizza like that for as long as I can remember. The cheese is my absolute favorite part…and I want to save the best for last. I think I am like that with most things. (I know you are all on the ends of your seats wondering about my deodorant choice for this morning. Wait no more…I chose the shower clean. I’m saving the feature event for last. Haha! Your welcome.)

So, how does God fit into deodorant and pizza? First of all…we need to thank Him for His inspiration and creation of the people who were born to invent these two things in our lives. Can I get an AMEN!?! After giving thanks…I got to thinking. I really do like to save the best for last. When I tell a story…I want to build and build and then tell the best part leaving my audience wanting more. When I write…I like to be stupid hilarious silly at first and then bring the power of God through simple truths in every day life. I want to leave my audience feeling as though they just had a revelation from God that they clearly understood and can actually picture in their lives.

So when does this rule NOT apply. In my eyes, this rule does not work for my quiet time with God. If I think I am going to give my best to God at the end of my day…when I’ve been beat up and bruised by the fire-filled darts of the enemy…I am severely mistaken. Once my feet hit the floor in the mornings to start my day…my brain is already going over my To-Do’s for the day. My kids are already asking for such crazy things as food and socks. (Can I just say how much I loathe socks? I can never find two that are the same…multiplied by the 6 people living in my house. They don’t stay their original color for more than one wear because apparently my children think that walking outside in their new socks is a requirement to “break them in”. And I hate trying to match them after a secret troll has carried only one of them away during the six step laundry process. Rant over.)

I am taking my cues from Jesus. I want to wake up while it is still dark. I want to rise while my family slumbers. I want to have an intimate encounter with my King FIRST. That, my friend, will be saving the best, most power-filled part of my day for FIRST! And I’m huge fan of starting my day feeling inspired to war for my family. Starting it feeling encouraged so that I have a voice to speak life. Who are you taking your cues from? When God prompts you to wake and meet with Him as a sacrifice of time…probably sleeping…are you willing? I am not here to guilt you. I am here to inspire you to imitate Christ…

Mark 1:35 “VERY EARLY in the morning, while it was still dark, Jesus got up, left the house and went off to a solitary place, where He prayed.” And what happened in Mark after Jesus had spent time with His father? He preached. He drove out demons. He healed a man with leprosy. And that is just in the the next 6 verses!

Jump ahead to John 14:12-14 (These are the words of Jesus HIMSELF!) “Very truly I tell you, whoever believes in Me will do the works I have been doing, and they will do even greater things than these, because I am going to the Father. And I will do whatever you ask in My name, so that the Father may be glorified in the Son. You may ask Me for anything in My name, and I will do it.”

Did you catch what Jesus just said? (You) “will do EVEN GREATER things than these!” If that doesn’t hit you deep in your core…check for a pulse. Jesus is still going to the Father on our behalf. He is still writing new songs in the hearts of His loves. He is still speaking truth over lies that have been believed for generations. He is still handing over the power to heal in His Name. He is still saving the lost through those willing to be His hands and feet. I could go on all day. The list of miracles He is performing just in the circle of people I know…would blow your mind. People are doing the unexpected. And our faith is being strengthened to expect the GREATER things.

I am pumped up! I am humbled. I am looking, in expectation, for my opportunity to show Jesus to be living and active in all areas. How about you? Do you believe that the words in those verses in John 14 are for you today? Do you truly believe they are relevant…or do your thoughts and actions prove that you think they are old school? I’m praying for simple, divine revelation for you today. YOU! I want the Maker of the Heavens and earth, to speak simply and effectively to you. I want you to see His hand and His heart so that you can share Him easily with those in your path.