Eric, my husband, got an opportunity to preach in our church this past Sunday. (He did amazing! Although when I tell him he kinda rolls his eyes and says that I 'have' to say that because I am his wife. Lol! For real though, I was so proud of him!!) Having been married to him since 2001...and dating him for quite a few years before that...I've heard all of his stories. Or so I thought. =) One of the stories he told that morning absolutely floored me!

He recounted a story of when he was a little boy. Somewhere between the ages of 6-8, he had gone to a playground with his father. His dad was talking...and he was off playing with another little boy. The boy had a lot of questions about God. Eric was answering the ones he knew and the ones he didn't, he would run over to his dad, ask the question and run back with the answer. At the end of that conversation Eric prayed and this little boy accepted Jesus. Don't get me wrong, that IS highly impressive at his young age...but what floored me was what Eric said next. "I led this little boy to Christ, and yet I, myself, didn't accept Christ as my Savior until I was TEN!"

It is all about being equipped. To be equipped is to have the tools or qualities necessary for performance. When we think of evangelizing, is it scary? When we think of praying with someone to accept Christ, is it terrifying? If you are saying yes you are not alone. I was there at a time in my life. I actually went to a summer seminar to learn to evangelize. And when I got the opportunity to tell my testimony I cried. Not in fear. Not because of nerves. But because this man who literally had NOTHING...was so hungry for our hope. My tears for him were what made him accept Christ that day. God will equip you...I guarantee it takes a lot less than you think. =) You did not have to do the hard part. Our part pales in comparison to what Jesus had to do for that salvation. It's the least we can do!

So, yesterday, morning my oldest son was awake and standing next to my bed, super excited about the trip he was leaving on. How do I know how excited he was? First, it.was.5:13.a.m. Second, he woke up and immediately started doing homework. Haha! He saw the light on in my bedroom, knew that I was already awake and he remembered that he had a couple pages of school work to finish for the days that he was going to miss. Luckily, they weren't math! Whew...they were Bible pages. I can do Bible before six in the morning...math, ugh...not so much. Lol!

I was going between writing my blog post, helping him understand what he's supposed to be doing and helping define words like 'equipped'. At one point on his paper there was a scale that ranged from 0-10. Above the scale was written, 'Color in the scale from left to right, stopping at the place that shows how equipped you feel to tell people about Jesus.' I was silent. I so badly wanted to peek, but I left him alone after defining the word equipped. I was minding my own business but I was SOOOO CURIOUS to see what he would pick. 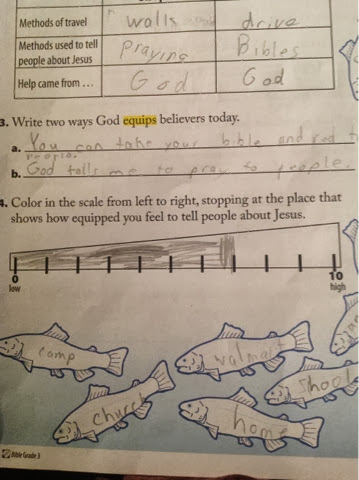 Can you see how far he colored?!?! That is a SEVEN!!!!! I'd say he feels pretty confident in his ability to tell people about Jesus. May I remind you that my son is only eight years old!!! I was so impressed. It brought a huge smile to my face as I raised my hand to high five him. I only pray that his confidence only grows as he matures. I pray that he's just like his daddy in this area. Without fear!

I actually would say that Aiden is already on his way to being just like his dad in many ways. For example, when my husband was in school he was a great swimmer. His event was the 200-yard IM (Individual Medley). It was two lengths of the pool for each stroke; butterfly, backstroke, breaststroke and freestyle. Last year was Aiden's first year swimming and one of the swim meets was full of odd events that they didn't normally swim. Aiden, on that day, got to swim the 100-yard IM. It was so cool for me and my husband to get to see. I remember being there...as my husband's then girlfriend...and cheering him on in his own event during our high school days. To do the same for my son was almost surreal. (Incidentally, Aiden won his first competitive IM that day. All of his opponents were disqualified for one reason or another. Haha!)

Another similarity they have, is that Aiden also led someone to Christ at a young age just like his dad. I remember the day. My kids were playing in the dining room. Aiden and Ariel, both a few years younger than they are now, we having a conversation.

"Do you have Jesus in your heart?"-Aiden
"No, what does that mean?"-Ariel

I just stood in the kitchen. Silent. I wanted to see where this conversation would lead. I wanted him to have his own voice of faith. He can't live on mine. He can't live on his dad's. And he understood, that Ariel needed Jesus in her heart too. He explained with child-like faith. And then he asked 'The Question'.

"Do you want to accept Jesus into your heart?"-Aiden
"Yes! I don't want to go to hell!"-Ariel

And so they prayed. My son, led his sister to Christ because he KNEW he could. He has the same power that I do. He has access to the same power that Jesus had. Aiden has a powerful ministry ahead of him. He is a worshiper. He loves easily...and without condition. And he is not afraid. He has seen miracles. He has been a part of the prayers that helped those miracles become reality. I encourage you to live your faith out loud in front of your children...but be sure they have their own. Let them first pray for healing...so that their faith can become stronger. And be willing to learn from them. God has put children in your life for a reason...do not see yourself above. They are simple...and sometimes it cuts through a lot of crap that distorts something you've made complicated.

What about you? Do you ever discount yourself from 'having to witness' because of your age? You think you are too young. Or too old. Or maybe it is your social make-up. You say you are too shy or too abrasive. If, today, you met someone who didn't know Jesus as their Savior...what would you do? Would you feel unworthy to talk and pray with them to receive salvation? Or would you dive right in, knowing that while you might not have the answer to EVERY single question they come up with, the answer to eternal death and suffering is easy. Accept Jesus. Follow His ways. Learn His heart. Worship Him. Flee from sin. Share Him as often as you can!

On a scale of 0-10 where would you rate yourself on how confident you are to share your faith? How can you make an effort to bump that number up? You are equipped. You have Jesus. You have the Holy Spirit. You have the heart of God written in the Words of the Bible. You have family that will pray for your faith to become stronger. I don't care if it is your actual family...or your spiritual family. Ask them to commit to lift you up in prayer in this area specifically! IT is vital. It is valuable.

If ever there was a time when I feel like people should have hung onto Jesus' every word...it was right after He was resurrected. I mean seriously...not one of them should have doubted His true identity and power...but they did. What did Jesus tell them though?

"Then Jesus came to them and said, 'All authority in heaven and on earth has been given to me. Therefore, go and make disciples of all nations, baptizing them in the name of the Father and of the Son and of the Holy Spirit, and teaching them to obey everything I have commanded you. And surely I am with you always, to the very end of the age.' " Matthew 28:18-20

The above passage usually titled, 'The Great Commission', is for you. It isn't just for pastors. It isn't just for those with seasoned faith. It isn't just for the young, nor for the old. It isn't just for the disciples of Jesus. It is for every single soul that has accepted Jesus into their heart. That includes you my friend. If you are leaving the job for everyone else....anyone else but yourself...you are missing it. Jesus Himself, was the one speaking those words to us. If He were in front of you now...would it have a greater impact? Would you fight Him on it?

If you have breath...you need to speaking for Jesus. If you have a  heart beat...you need to be loving the lost (and the saved!) If you have sight...you need to be looking for opportunities to be used. If you can hear...listen for the voice of God. He is speaking. He is telling you where your ministry is. He is whispering thoughts of hope that someone needs to cling to. He is reminding you of Scripture so that you can share truth over lies. You are not dead...stop acting like you are. You have hope...share it at all costs. Wouldn't you want it for yourself? What if the person that helped  you to come to know Jesus had been too afraid? Or too old? Or too young? Or too shy? Or too busy? Or too.....

Eternity is a long time! Be a part of changing someone's eternity today! I guarantee you will be blessed...and they will be forever changed! That is a win, win! =)