Ahhhh gardening. It does not matter if it is fruit and veggies or bushes and flowers; it is an enjoyably therapeutic pastime for some and an incredibly frustrating disappointment for others. Raise your hand if you are a gardener. You totally did it didn't you? Bahahaha...you are so predictable. ;-) I guarantee if you raised your hand it is because you either enjoy it...or have had success with it.

Whether you are a successful gardener or not...you can still appreciate the work and simple concepts of the labor intensive process. You put the time, sweat and work in...you yield the blessing of the crop. Or you labor, cut and prune and you enjoy the beauty of some of God's finest handiwork. 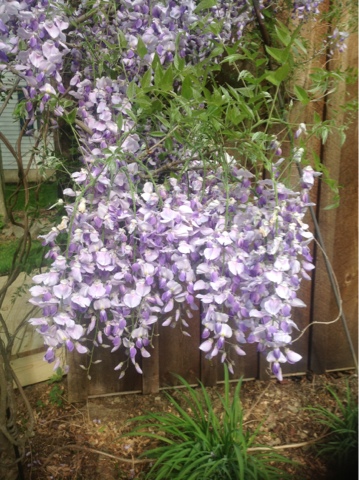 Gardening for me is so NOT like therapy. If anything...it causes the need for anger management. Lol! ;-) For me it isn't about our success in getting the crop to grow...but about what destroys it before it is mature and ripe enough for use. My husband and I learned from our first garden, that a fence was necessary on our farm of 'roaming goats'. Lol! We have two short, plump pygmy goats. Salt and Pepper. Yes, Salt is white and Pepper is brown. We are not the most creative bunch. Lol! So this spring, during the planting season, we got smart. We built a raised garden and surrounded it with an electric fence. No more goat problems right? Right!

BUT, just so we are clear and incase you were not aware...chickens can fly over electric fences. :-/ So far this season...I have gotten ONE lonely tomato from my garden. I chopped it up immediately and put it in a taco salad I was eating for lunch that day. I didn't want there to be any chance of that precious fruit of my labor getting eaten or dropped. Lol! Every other sign of life has been eaten just as quick as it began to grow. My cute little, greens tomatoes...devoured before they were ready. Grrrrrr!

Let's spin this garden to a faith lesson. In Psalm 145:13-14 David writes, "Your kingdom is an everlasting kingdom, and your domain endures through all generations. The Lord is faithful to all His promises and loving toward all He has made. The Lord upholds all those who fall and lifts up all who are bowed down."

Think of a promise God has given you. Do you KNOW, do you really honestly trust the words of this Psalm? Do you wholeheartedly believe that no matter the circumstantial evidence...God IS faithful to ALL of His promises? Do. not. doubt. them. Do not waver. Hold on tight because He has not forgotten you. Read and reread the above verse as often as you have a tiny seed of doubt. Do not let it take root in your heart!

The weeds are a nuisance. They destroy without thought or remorse. They just grow because they are planted. They are not to be held responsible. It is the planter. The hand that planted them is to blame. Have you ever been a planter of seeds of doubt? I remember the first person I ever told that I wanted to write a book. The first thought that came back at me was that it was just a dream that probably would never happen. I let that weed grow tall and strong. My promise from God was hidden in the shadow of doubt. Then one day I was strong enough and smart enough to know how vital weeding is to a healthy garden.

The weeds of doubt and untruth had to be ripped out. I found truth in the word of God...and I stood on it. I know God's track record. I know His scale of goodness and mercy is tipped in my favor. I know His desire for my life...because He told me. He showed me in a vision. I'm in constant communication with Him. So now those weeds don't. Have. A. Stinkin'. Chance. :-)

Let's go back to the planter of seeds. We've all planted a few. Hopefully without intent. Does this type of gardener currently describe you? When a Christian comes to you and tells you of a aspiration or life goal...are you the first to squelch it? Are you the first cast that shadow of doubt? You feel like you are just being a realist. You are excusing your actions because you are merely trying to save them from disappointment.

BUT...you are not God. You can't even get onto a scale with Him because if He dropped a even a hangnail from His finger onto that scale, He'd send you sailing though the air. Your thoughts are not His thoughts. They are too small and simple minded. They are too into self. They are too limited by your view.

Hold onto God's promises for yourself...and be passionate about it. Mediocrity has been done...and it is not appealing to anyone that desires life over death. Passion is what draws people in. Christ is what keeps them there. And when you hear an aspiration of a fellow believer that seems like a stretch...stretch. Allow your faith be stretched. Believe and pray against your own tendency to have unbelief. Let your mind be opened to the promises of God.

Stop. planting. weeds. Stop standing in the way of the Son. Stop stomping on others promises because you are also missing out on your own. Stop devouring others dreams with your own doubt in the Word of God. INSTEAD...share your crop of promise. Teach others how to have successful gardening experiences. That is how we believers in the Word roll.

"God is not a man that He should lie, nor a son of man, that He should change His mind. Does He speak and then not act? Does He promise and not fulfill?" Numbers 23:19-20
Posted by Vanesa K at 5:47 AM