Living in a World of Inappropriateness

One thing I say often....that I honestly never knew before having kids...is that they would teach me. Most times it is not something that I never knew...but rather something I forgot. Maybe a better way to say it, would be to say that they often remind me to have the same good morals I ask of them and to do all things with a more pure way of thinking. I didn't realize that my kids would constantly be asking hard questions; that would in turn keep me in line without them even realizing it. And I never knew that taking the time to see the view from where they are...would, more often than not, show me a perspective that radiated Christ.

One thing that my kids love to do is help me check out at the store. They fight...literally fight...over who gets to put the most things on the conveyor belt. Then they race to the other end and begin loading the cart back up with the bags full of groceries...in a quick...I don't care if your bread gets squished-I will do this before anyone else gets a chance to...type of manner. It keeps them occupied. It keeps their little unsatisfied eyes away from all of the candy, pop, toys, and beef jerky that the grocery store staff so cunningly place in the isle of our Wal-mart. So, I break up the squabbles as needed...and let them go. 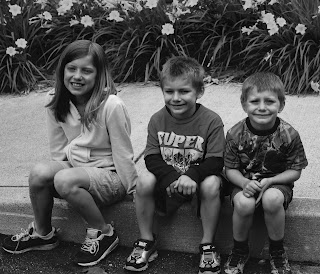 A couple weeks ago I had my three youngest children with me. Ariel-8, Titus-6 and Levi-4; loaded up the groceries to be purchased as normal. But then they stayed at the back of the cart. I thought it was unusual...but since I was buying bread that had not yet been squished...I decided to let them be. They were behaving. They weren't handling all of the candy and toys and looking to me to buy it all. They were talking. Like normal little people. (I love it when they act, within view of the public eye, as though we normal!!!!) 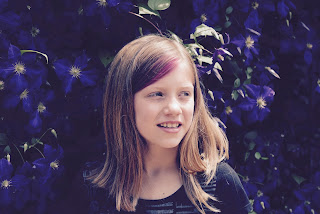 I looked back at them again and noticed something strange. My daughter had her arm oddly stretched across the end of the isle. After getting her attention, I asked what she was doing. She looked at her two little brothers and then back at me. She slightly lifted her hand from the magazine it rested on, while still watching her little brothers and shielding it from their view. She looked up at me, widened her eyes and mouthed one word. "Inappropriate!". I looked under her little hand and saw the massive amount of cleavage she was covering. I mouthed back two words. "Thank you!"

This world is full of inappropriateness. FULL! Commercials. Magazines. Ads on YouTube. Movies. Billboards. Christians. Ugh...it hurts me to type that last one. But alas...it is sadly true. The enemy will use anyone and anything to put seeds of inappropriate thoughts into a child's head. My children are constantly confused by how some people choose to speak/act/dress while claiming to be a Christ-follower. I want my kids to be sensitive to such things. To set their standards high no matter what is popular, accepted and easy.

I am the one who has to answer a lot of their hard questions. I am the one who is desperately trying to teach them to freely give grace WHILE still refusing to lower their own, self-set standards. I pray protection over their eyes, hearts and minds. I even go as far as to avoid 'repeat offenders' of inappropriate talk/dress/behavior when my kids are with me. They. are. mine. and more importantly...they were His before I ever knew them. I take my position, to equip them with a base of Godly morals and good character, very seriously. 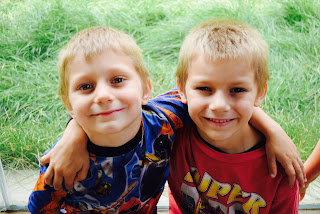 There is no guarantee that they will turn out well by chance. That is just not how life works. We are to live life purposeful and conscious. My children will have traits of Christ because I relentlessly prayed for them in the most secret places of my heart. They will know what it means to be a genuine Christian because my husband and I taught them the best we knew how. Because we led with our lives rather than our dictation. Because when we messed up, we asked for forgiveness...from our kids and from our Father.

My kids are setting their standards higher than I did as a child. I love to watch them choose what they are unwilling to allow into their life. Sometimes it is their own friend who makes them uncomfortable by the things they choose to do/say/watch. Sometimes it is an adult who dresses in a way that is scant. Sometimes it is an unwanted, non-Mom-approved advertisement that pops up while they are waiting for the newest TobyMac video to load. Sometimes it is a movie that has what they deem as evil. I give them room to choose. I respect their choice.

I'm raising up a generation in my house. A generation of leaders. Of servants. Of bold warriors. A generation that prays. That loves. That forgives. Because when I forget....they will remind me. <3
Posted by Vanesa K at 7:46 AM

Email ThisBlogThis!Share to TwitterShare to FacebookShare to Pinterest
Labels: Be In the Light, Be the Church, Becoming Genuine, Being Purposeful, Conversations W/ Kids, Innocent Eyes, Parenting