Want To Be Different? 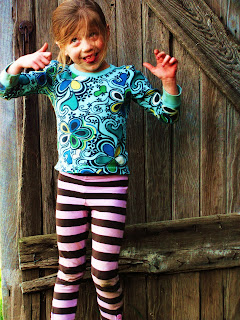 Being different can be a wonderful thing. Just ask my beautiful daughter Ariel. I always say that she is in a league of her own. I love everything about her! The picture above is a day that I decided to test out the continuous picture taking setting on my camera. I'm in love! I just asked her to be silly and make whatever faces she wanted. This is one of my favorites! (And the outfit...also one of my favorites. She picked it all on her own. Shocker!)

Growing up I would've considered myself to be a shy person. I remember a time when I went to the meet the band, Mylon LeFever & Brokenheart. (Anyone out there remember them?!) Before going backstage with my aunt who worked for them, she made me promise that I would talk to them. Cross my heart and hope to die...I promised. I was fairly young at the time. Old enough to remember...but young enough that some of the band members picked me up and passed me around the circle talking to me. I stood motionless. My face...like a stone. My voice...unwilling to cooperate with my previous pinky promise to my aunt. I am not sure that I ever even smiled.﻿ I just didn't realize that they would all seem sooo big to such a little girl!

We stayed for a short time...and then walked back out to where the concert would be held. As soon as we were out of sight I gushed with the thrill of what I had just experienced.
My words...
"That.
Was.
Awesome!"
I didn't shut up for several minutes. Until my aunt asked..."What was that?! You said you were going to talk!?"

Years later...the day came that God changed my outlook. It was through the words of a dear friend while we were sitting at her house with our babies. God had a divine appointment for me that day and I know that it has changed me for life.

Her words were simple. "You know what you are? You are meek." In my head I am sure I was sighing...I KNOW! I hate that I am weak. The next part though...it was the powerful part of her statement. "Meekness is a trait of Christ!"

Finally I understood that meekness and weakness are not synonomous. I was only weak if I allowed myself to be lied to by the whispers of the enemy. It had worked for years...and God has just revealed the truth. The enemy and his lies now sat naked before me. Unveiled. Uncovered. Conquered by the obedience of God's daughter. (Miss Erin...you probably never knew what you helped unleash in me that day! Grateful doesn't even begin to describe how thankful I am for your willingness to share what God spoke to you.)

I would still say I am shy at times. I am still easily intimidated. But I am confident in Christ. I am a powerhouse of prayer and I love to use it to unveil the enemy. I love to leave him naked before someone else who has just caught him red-handed.

Powerless. He is without power if his lies aren't believed. If his deceit isn't bought. If death isn't feared. If sickness is healed in Jesus name...what else does he have? He has to constantly come up with new ways to try to bring me down, because I am just going to keep praying for his unveiling. I am no longer the one who fears...but the one to be FEARED! And that makes me cry and laugh all at the same time!

For those of you who might not know, my husband is the worship leader at our church. I am one of the lead worshippers. (I am not putting myself above any other team member. Let's be clear on that!) I am saying that when I am on the stage every Sunday morning...I do not see myself as a part of a show. It is never a concert. It is a group...leading worship by example. All of us up there are lead worshippers. (Even some of the congregation fall into that category...right from their very own pews. Their intimate time with God is an encouragement to the worship team! We see you...and it helps inspire us in our calling!) When I am praising and worshipping through song, I am approaching the throne of grace with confidence. I only get nervous of singing infront of people...when my focus gets shifted. When I remember Who I am singing to...there is nothing to fear...and everything to gain!

I would have to say though, that I am most confident when I write for my King. I love to see what God will use to make His point known. Sometimes it is my silly children. Sometimes it is my own life experiences. Sometimes it is nature. But each post (with the exception of the few silly ones)...comes from my intimate time with God. His strategy is unlike any other. (Thank goodness for that! Life would be boring if we had only our little pea brains to rely on!)

God didn't make us from a cookie cutter. Celebrate your divine calling. Find out what it is. Ask. Seek. Listen. Don't let another day go by that you listen to the lies of the devil. You are here, right now, to know God more intimately in YOUR life. Be still with Him. Your life will never be the same as the day that you accept exactly who Christ designed you to be. And that my friend...is a wonderful thing.

Be content in everything...except how much you know about Christ!

Otherwise...celebrate your life just as it is!! Be happy with where God has placed you. Utilize your God-given abilities to be effective for eternity. Share your testimonies of God's goodness to whomever He leads you to! If you are meek, those around you may think you are weak. The enemy may think you are weak. But, oh, how lovely it will be to prove them wrong. Haha!

Rise up you lioness...rise up! Christ has called you for His purpose. Are you ready?! I'm excited...because I've been waiting!!
Posted by Vanesa K at 3:00 PM

Email ThisBlogThis!Share to TwitterShare to FacebookShare to Pinterest
Labels: A Peculiar People, Contentment, Lies of the Enemy, Scheme of the Enemy, Strategy of God, Traits of Christ, Writing with Purpose