Lions are the Coolest

I am sooo excited to get this post into writing that I can barely contain myself! God has proven Himself faithful yet again. I know He is faithful. I tell people that He is faithful. And yet when He proves it…I am still so in awe and filled with excitement…that I just have to share it. =)


Okay, so a few nights ago I prayed with my children, as I do every night before they go to sleep. After I was finished I sent my husband in to pray with them too. He came back out saying that our oldest son Aiden (age 7) was upset and wanted to talk to me. (When I left him he was fine. Just sayin’. Haha!) I go in and find him crying. Like, not a little bit crying, but close to sobbing. I asked him what was wrong. His answer…angered me.


I won’t get it word for word…but basically he said that the enemy was attacking him. (And when he says enemy…he means the father of lies. Aiden knows his Father…and knows about the deceiver.) He went on to tell me that the devil kept putting evil thoughts in his head. Like thoughts to say mean things to people that would make them sad. And that he was trying hard to not say them…but it was getting more difficult because they just kept coming to his mind. He said he didn’t feel strong enough to pray.


I took him out of the bedroom and we sat on the couch together. You see…I too know who my Father is. And no matter how angry this makes me as Aiden’s mother…it infuriates God even more. So I knew that we (God and I) had to speak life into Aiden. That we had to use this as a divine opportunity to strengthen his faith. That we had to remind him of who he is. “A blood-bought, highly-favored, child of the Most High God!” Them is fightin’ words! =) 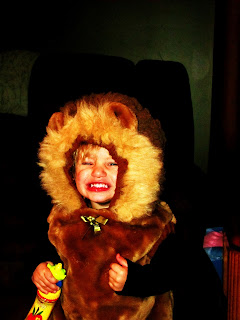 I began by reminding him of a scene from the Lion King. It is one of our favorite movies in the Knapp house. (Lions are the coolest! And my kids often crawl around roaring like they are lions. I prefer that to Kung-Fu any day. Lol!) The scene that I reminded him of, was the one where the three hyenas are talking with Scar. The one hyena says the name ‘Mufasa’ and the other one shudders. She says..”Oooo (as if getting a frightened chill), do it again.” He says the name ‘Mufasa’ again…and she gives the same response.


I compared that to the enemy. When we say the name of Jesus…the demons shudder. They loathe the name of Jesus. They can’t help but to flee at the mention of the name of Jesus! (Notice how I keep saying it? Love it!) I reminded Aiden of how much power there is when we just speak the name of Jesus. I told him that as soon as one of those mean/evil thoughts come into his head…that he was just to say, “In JESUS name I do not accept that! That thought is not from my Father!” I told him to say it loud and proud. Scream it if he had to!


After our conversation I prayed over him. I prayed that God would give him a dream in the night. I prayed that he would remember the dream…and that it would help to make him stronger. Then I made him pray. I don’t want any of my children to EVER feel too weak to pray over themselves. That is lie from the enemy…and I don’t accept it FOR them! I sent him off to bed and never heard a peep from him for the rest of the night.


Friday was his last day of school. I ended up driving him there…and so I asked him if he had a dream that night. Are you ready for this? It should send chills down your spine because of how awesomely, amazing our God is! It brought instant joy-filled tears to my eyes while he was telling me. God gave my son a dream. Do you understand that? The God in Heaven. The Creator of all that we see. The Maker of the Heavens and earth. The Alpha. The Omega. The beginning and the end. The one and only Savior…cares so much about my son…that He gave him a dream. Wow! I absolutely believe it. And at the same time I am humbled to think of it.


Here is his recall of his dream. “We were in the rainforest. (They’ve been learning about it in school the last few weeks.) And all these animals kept coming up to us. Big animals. Like cheetahs, tigers, jaguars and ocelots. Animals that roar. But they weren’t roaring…they were really nice. They were letting us pet them. This hyena came up to me and was trying to bite my hand. But a lion came over and roared at the hyena and didn’t let it bite me. We were scratching the hyena behind it’s ear and it’s leg was thumping on the ground as if he liked it.”


Do you get it?! Do you see how amazing God is?! Any of those animals could’ve proven God’s point…but he chose the hyena. Who ever even thinks of a hyena? They are not cute, nor cuddly, nor cool. I might have missed it if God hadn’t chosen the hyena though. And it just makes this story even cooler, that God got detailed to get our attention because of the conversation that had taken place the night before.


The enemy (the hyena) wants to bite us. He wants to wound us so that we will be afraid to serve God. He wants us to want life to be easier. And he tells us that it would be easier if we would just stop serving Christ. Remember the father of lies is his name. That is his name because that is all he has. Lies! But our God is like a roaring lion!

“God’s not dead! He’s surely Alive. He’s living on the inside. Roaring like a Lion!” (Those are lyrics to a song that Aiden has been singing for a few weeks. He sings them with power and conviction…and I LOVE it!) So God sees the enemy trying to harm us…and all He has to do is speak. He never has to lay a hand on the enemy to make His power known. God speaks. The enemy is hushed. The enemy’s power is stripped…and he is like a little harmless puppy before you. Thumping his foot on the ground when you scratch his ear. Nothing scary about that mental picture, huh?


Oh how I love it when God strengthens my children’s faith. I know that God has an amazing purpose for Aiden. And the enemy wants to destroy him while he is young because he thinks he is weak. HA! As I have said before…he is sly…but not at all smart. For Aiden is a son of the King. He is covered by the blood of Jesus. And his lioness mama…she is a warrior. She knows the power of prayer. She knows the divine calling that it is to mother children into the Kingdom. She does not take it lightly. And she will teach her little man to war with her. To fight. To not ever be afraid of the enemy because of the Mighty God we serve. To always pray, even if he feels weak…because when we are weak HE is strong! We’ve been singing those words since we were little…but do we truly believe them? I say…you better bet I do!!


Have a blessed day! I pray that God renews and strengthens your faith today. Ask Him to…and be looking and waiting for it. And when He does it…I would LOVE to hear about it. It fires me right up, and strengthens my faith! Keep sharing. Keeping firing others up. Keep the ripple going…so it gets bigger. And bigger. And bigger!! =) Love to love ya!
Posted by Vanesa K at 1:54 PM

Email ThisBlogThis!Share to TwitterShare to FacebookShare to Pinterest
Labels: Conversations W/ Kids, Faith Like a Child, Lies of the Enemy, Parenting, Prayer, Scheme of the Enemy