Whatever You Do…Do NOT Give Up!

I was reminded of this simple statement last week. Don’t give up! Why…you might ask? Because, when you give up…you make it more difficult or maybe impossible for God to show that He is faithful to the end. Forever faithful to YOUR end! Let me set this scenario up for you. I will show you how persistence, and the will to keep on keepin on…pays off! 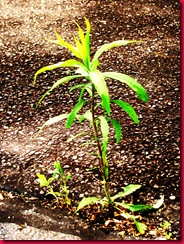 I told my husband that I was going to call this picture…’Persistence’. Ha-ha. He rolled his eyes…as usual…and asked if I realized it was a weed. He is so not artsy as I am artsy. Ha-ha! ;)

Really though. I was looking at this weed growing strong in the middle of a huge black-top paved sidewalk…and it got me thinking. This weed has strength and persistence. It is surrounded by harshness and ugliness. It rarely gets a break from the unrelenting sun. It is hated by most people that walk by it. It is stepped on if it gets in the way. It is ripped out by anyone who has the urge. Sounds like a healthy environment to grow up in huh?

Do you realize that there are people that feel like this? Right in your city. In your circle of friends. In your house even. There are people that are surrounded by harshness, darkness, ugliness. They always feel beat on and burned. They are hated by sight without even a chance of ever being spoken to. They are stepped on by people they trusted. They are ripped on or pulled down by anyone who just decides they feel like it.

What about Jesus? Couldn’t that also describe Him? Do you think He walked around feeling defeated or delivered? Hated or loved unconditionally? Empty or always full? Broken or complete? Starved or satisfied?

I think about how close I have been at times to giving up…and I feel a bit ashamed. I do not have to handle what Jesus had to. I do not endure even a fraction of what He did. And yet…He was blameless. He was the ultimate example in every aspect. Every conversation. Every harsh scenario. Every slanderous accusation against Him. He was perfect.

You see…He KNEW who He was. He knew who His Father was…and what He was capable of. Being fully man, He showed us by example that it is absolutely possible to rely on your Father in Heaven to fight on your behalf. To wage your war. To clear your name. To get vengeance when needed. To instruct you…and come out blameless.

So why do we so often forget to follow Jesus’ example? Ugh…I know! I am right there with you.
Let’s just say that you are a youth leader at your church. Let’s also say that for weeks…no let’s say for months (maybe even close to a year)…that the enemy has been feeding you lies. You thought they were from him…but you still kept thinking them. Saying them. Believing them. And the more you said them…the more you believed them. And the more you thought they were your thoughts and not his.

So one day you decide you are going to give up. You are just going to not show up…knowing that you might be the only leader there that night. You are done…because you are not good at what you have been trying to do. You are not good at public speaking. You can’t breathe when you talk to them. You feel like your breath is being sucked right out of you.

Even though you want to stay home…you go because you know the result of you not going could cause bigger problems. You hate confrontation even more than awkward the youth’s awkward silence or harsh comments. You decide it will be a night with no teaching. Instead it will be a time for testimonies and prayer. For your unwilling…and also willing obedience…

GOD SHOWS UP! God proves Himself faithful to the end. God gives you examples to speak. God gives you words to pray. God moves mountains that have been built by the enemy. God strengthens relationships. God breaks down barriers that society has set. God breaks through silence…and speaks! God sheds light and truth on the lies that the enemy has been feeding them…and YOU! 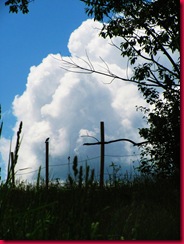 Praise God! How awesome is He? I mean come on. I was humbled by that night. No wait…I mean you would’ve been humbled by that night. Ok I give…I was referring to myself. Shocker, I know! I was at my breaking point. I was believing junk. I was speaking that junk over myself. I was so close to giving up…and God saved me. He renewed me. He refreshed my passion. He lit the fire from within. I don’t deserve Him…but I don’t understand how anyone lives without Him!

How about you? Does something immediately come to your mind when you read this. Something that you have been allowing to be spoken into your life. Something that does not come from the correct Author. The father of lies, satan, is an imitator of light. He tried to be like God…and he got cast out of Eternal Glory…into eternal suffering. Now…he spreads lies to bring others into his suffering. When you are a child of the King though…you can tell a fake. You know your Father…and you know how He speaks. Trust in your Author…and cast anything else back where it belongs.

I would love to pray for you. Contact me however you can. Written words of life have everlasting effects! I live to write prayers for people. Please don’t shy away from helping me to fulfill my calling! I would LOVE to hear from you!! 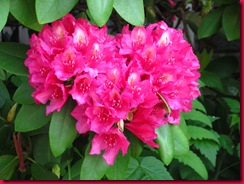 Email ThisBlogThis!Share to TwitterShare to FacebookShare to Pinterest
Labels: I'll War W/ You, Lies of the Enemy, Persistence, Prayer, Scheme of the Enemy, Strategy of God