God brought this illustration to my mind recently. It was given to me years ago by a man named Ben, who at that time attended a Bible study in our home. =) I have used it so many times since I first heard it. If I gave Him a dollar for every time I repeated this example…he would not be rich…but I’d owe him a pretty good chunk of change. Haha. Anyway, God prompted me to share this with you…so it must be for someone out there! =)

Tell me…what is this a picture of? 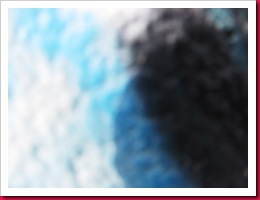 Can’t tell can you? This blurry, fuzzy color blob just doesn’t make sense, does it? This is actually a close up of just one teeny tiny part of a mural. I’m talkin’ a huge building-size mural in my hometown. Let’s pretend that this mural represents our lifetime. This is what we see through our own eyes. 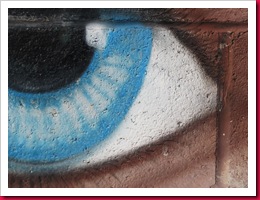 It is as if we have our faces smashed against a building-sized mural. How can we make out what is our next step? How can we make a decision on whether this is good or not? Is this part of God’s plan…or is this a dangerous scheme of the enemy? This is what you see. Is this what you are basing your life decisions on? A fuzzy blob of color that doesn’t make sense. Are you just floating through life…hoping for the best?! There must be a better way!

This little chunk of the picture is the part that God allows you to see. 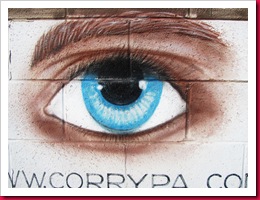 I would not have experienced a miraculous healing from post-partum depression, because I would have avoided ever going through it if God had allowed me to see it coming. I would have missed out on the blessings of my four living children if I had known that I would have three others that would never make it to full term, and chosen not to go through that heartache. I would have chickened out on a lot of things that have been used for my good.

I know now that I HAVE NO CLUE WHAT REALLY IS BEST FOR ME! I do not know what it takes to stir up the calling that God has placed on my life. But I can trust Him 100%. I know that NOW. If I had not seen God work all of these things together for my good…I would not trust Him as I do now. I have absolutely no reason NOT to trust Him. He has been the only One who has never failed me. He has always been faithful!

You have heard it said that only God can see the ‘big picture’. This is the whole mural on the side of a building in Corry. 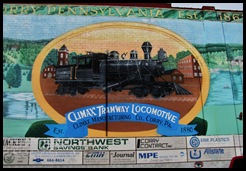 This is what our lives look like to God. A beautiful masterpiece. Each trial, just one stroke of our design. Each mountain. Each valley. Used to mold and shape us for His purpose. What powerful warriors come out of pain! What amazing ministries are birthed out of following God’s path no matter where it leads.

The way I see it, there are four different types of people.

1) Those who have their nose smashed against the mural and are desperately trying to figure it out before they move at all.

2) Those who have their nose smashed against the mural and have their eyes closed because they fear what they will see and might not like.

3)Those who have their backs to the mural and can’t figure out why they don’t know where to go next.

4)And then there are those who have their nose smashed against the mural and trust that God will reveal His way. They wait when He says wait. They move when He says move. They trust because they have every reason to…and absolutely no reason not to!